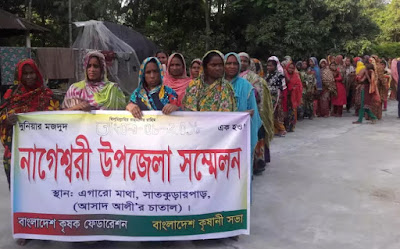 On the 9th August 2018 Bangladesh Krishok Federation (BKF) and Bangladesh Kishani Sabha (BKS) organised a peasant and landless gathering in Nageswari sub-district of northern Kurigram district. Small-scale farmers and landless people from different village of Nageswari sub-district came to the Egaromatha village and attended the procession and rally there. Few BKF and BKS leaders from other sub-districts of Kurigram district also joined in the gathering. The BKS president Asma Begum was present as a chief guest in the gathering.

In the gathering BKF and BKS leaders demanded to the local government to distribute all the Khash land and common water-bodies of Nageswari sub-district to the local landless and fisherfolk people to uphold the Bangladeshi land manual as well as follow the government declaration. Leaders also demanded profitable price for all the agricultural products in the harvesting season. In the gathering leaders spoke about agro based industries which can be sustainable way to solve the severe unemployment problem in the rural area. 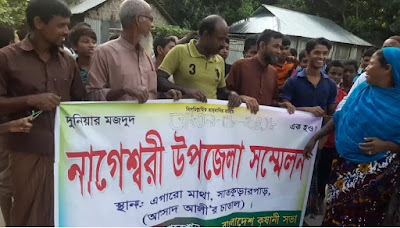 In the gathering local leaders expressed their commitment to continue and intensify the fight until fulfil farmers and landless communities demands.

Posted by Unknown at 8:22 PM No comments:

Indigenous organisations came together in Dinajpur to fighting for their future. Jointly observed the Santal peasant revolt day. 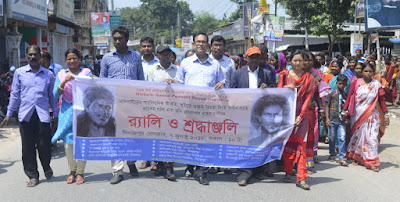 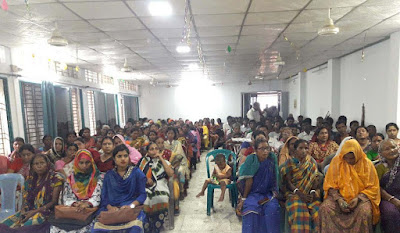 On the 7th of July 2018, BKF, BKS, BAS and other eleven organisations jointly observed historical Santal peasant revolt day in Dinajpur. It was 1855; Santal uprising was against ruthless exploitation of the British colonial rule. On 30th June 1855, a large number of Santals assembled in a field in Bhagnadihi village of Santal Paragana (present Jharkhand, India). They declared themselves as free and took oath under the leadership of Sido Murmu and Kanhu Murmu to fight to the last against the British rulers as well as their agents.

Militant mood of the Santals frightened the authority. A Police agent confronted them on the 7th July and tried to place the Murmu brothers under arrest. The angry crowd reacted violently and killed the Police agent and his companions. The event sparked off a series of confrontations with the Company's Army and subsequently reached the scale of a full-fledged war. 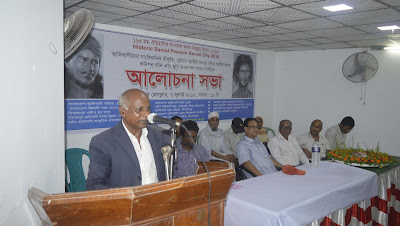 At the outset, Santal rebels, led by Sido and Kanhu, made tremendous gains and captured control over a large tract of the country extending from Rajmahal hills in Bhagalpur district to Sainthia in Birbhum district. However, the rebels could not hold on to their gains due to the superior fire power of the East India Company which was soon aimed heavily at them. Out of 50,000 Santal rebels, 15,000 -20,000 were killed by the British Indian Army. The Company was finally able to suppress the rebellion in 1856, though some outbreaks continued till 1857.

The Santal revolt had a long-lasting impact. Santal Parganas Tenancy Act was the outcome of this struggle, which dished out some sort of protection to the indigenous people from the ruthless colonial exploitation. A Santal territory (Jharkhand) was born. The regular police was abolished and the duty of keeping peace and order and arresting criminals was vested in the hands of parganait and village headman. 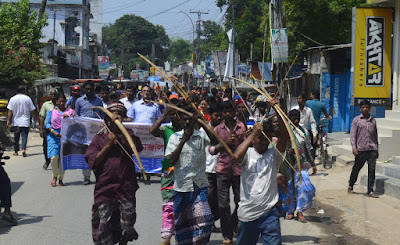 Even today Santal revolt is inspiring the indigenous communities and all other agricultural communities to build strong campaigns to get all the rights. In Dinajpur 11 more organisations raises their hands to support and join with the BKF, BKS, BAS campaigns on the basis of the Santal revolt day inspiration as well.

Posted by Unknown at 8:11 PM No comments: 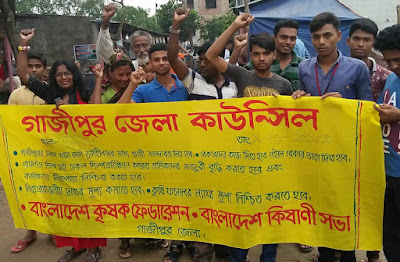 Bangladesh Krishok Federation (BKF) and Bangladesh Kishani Sabha (BKS) formed a district committee in Gazipur district which is one of the biggest industrialised district of Bangladesh and adjacent district of capital Dhaka. In the committee formed council was held on 18 May 2018 in Vadam of Tongi sub-district. BKS president Asma begum was present as a chief guest of the council.

The new BKF and BKS Gazipur district committee took oath that they will build storng campaing for local peasants, landless and garments workers to reserved their rights.
Posted by Unknown at 9:24 PM No comments: 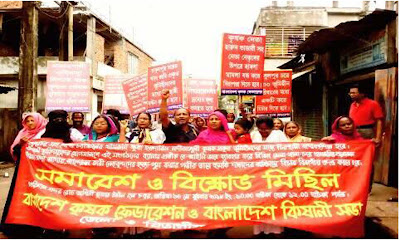 In the rally, BKF and BKS leaders said, BKF and BKS central committee were expelled Zayed Iqbal Khan and Samsunnahar Khan Doli in 2002 and Badrul Alam led the expulsion process that time as a BKF general secretary. The allegations against them were very serious; they gave fake promise to landless families that they will give the land entitlement of the occupied Khas land. Zayed Iqbal Khan and Samsunnahar Khan Doli took money (tens of thousands of 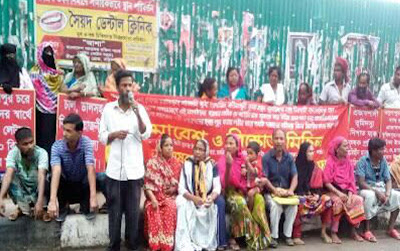 dollars) from thousands of landless families of the occupied different Char (small island). Hundreds of landless people sent written allegations to the BKF central office against Zayed Iqbal Khan and Samsunnahar Khan Doli that time. BKF central committee was forced to expel those extortionists then. Last year (August 2017) BKF central committee expelled Badrul Alam because of his human trafficking activities, organisational fund embezzlement and autocratic actions against BKF constitution. Now all three extortionists Badrul Alam, Zayed Iqbal Khan and Samsunnahar Khan Doli came together and trying to rip off the landless families again. Recently government declared to distribute fallow land among the landless and the extortionists are desperate to take the chance to embezzle money again from the poorest landless communities of Bangladesh, leaders said in the rally. 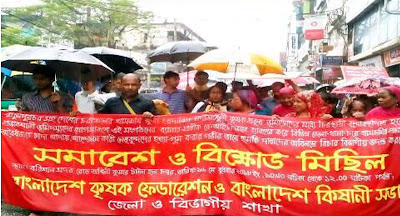 In the procession, people chanted slogans against the extortionist Badrul Alam, Zayed Iqbal Khan and Samsunnahar Khan Doli with placards in hand. The procession rounded different road of the Barisal CBD.
Posted by Pathak Lal Golder at 5:54 PM No comments:

BKF and BKS meeting in Bakerganj 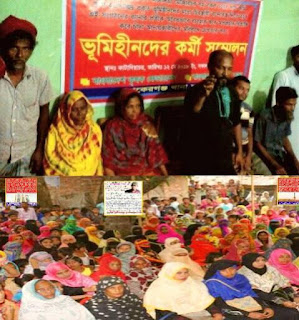 Posted by Pathak Lal Golder at 12:58 AM No comments:

Posted by Pathak Lal Golder at 12:45 AM No comments: